Unfulfilled expectations are the main driving force behind the euroscepticism in both old and new member states of the European Union. What differs is the type of expectations people had – while Westerners expected Easterners to behave according to the true european values (such as solidarity, or zero corruption tolerance), Eastern Europeans expected to become as economically developed as Westerners, with the same life standard, food quality, etc. What these two viewpoints have in common is that people in both parts of Europe expected the European Union to gradually develop into one entity with unified norms and wealth level in all of its parts.

These are the main conclusions from the first stage of an international research based on 66 debates done in six member states – Austria, Bulgaria, Hungary, Germany, Latvia, Slovakia. The debates were organized under a project “Comprehending and Debating Euroscepticism” supported by Europe for Citizens program of EU. Debates in Bulgaria were conducted by Capital foundation. 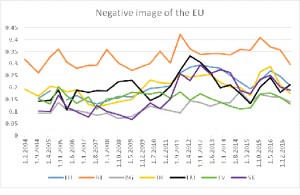 Future of European integration is increasingly more discussed in current Europe with rising euroscepticism being a major concern. The project “Comprehending and Debating Euroscepticism” studied euroscepticism among ordinary citizens in the countryside and how this can be addressed on local level. Even though these countries are not the most eurosceptic ones in the EU (e.g. Great Britain, the Netherlands or Denmark), there has been recent increase of the Eurosceptic tendencies across all disputed countries. Germany can be seen as the only exception; however, looking at eastern part of the country, the tendency is present.

According to citizens, the main benefits of the EU are the four basic freedoms, most of all freedom to travel and work in other parts of the Union. Most criticized were the European funds as the source of corruption, migration crisis as an example of the Union’s failure to protect itself, and the feeling of second-class citizenship in the post-communist societies.

Despite various attempts to bring the EU closer to its citizens, the project of European integration is still perceived as exclusivist one. The perception of the EU as the project that only somebody else is profiting from was regularly popping up in all debates. In Germany, it was pointed out that the middle and upper classes reap most of the benefits of the European Union while the working class is left alone. In one of the Austrian debates, they pushed it even further and named big business interests as ones who used the EU at the expense of its citizens.

Similar perceptions, but debating in more personal manner were also presented in the CEE countries. In Slovakia, Bulgaria or Hungary, only few people identified themselves as the beneficiaries of certain EU programmes and funds. Another negative image of the EU funds that is still present in the CEE countries is based on center/countryside dichotomy. The argument is that further away from the capital cities people live, the further away are the economic opportunities and the benefits of the EU.
Discussions on the EU funds revealed two important implications for the EU policies and their further communication. 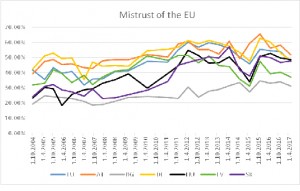 First, without the effective oversight of the EU funding by supranational, EU-level authorities the appreciation of financial support from the EU will deteriorate: it is not going to strengthen the image of “strong, helping supporter” but that of a “weak lavisher”. Second, the accent of benefits for “ordinary people” should be strengthened in the communication of the benefits of the EU funds. Ideally, people need to understand its availability and profit to each of them/us, even to people like you or your neighbor.

Migration crisis is also considered as a source of euroscepticism across the whole Union. Noteworthy is the incongruence in the perception of own nationals being so-called economic migrants in Western Europe on the one hand, and migrants coming to Central Eastern Europe from non-European countries on the other hand. While the former is all right because it benefits “us”, the latter is not seen as the other side of the same coin.

The idea of CEE citizens being treated as second-class European was voiced out in every country under investigation. Inequality of living standards between EU member states; different pay for the same activity depending on the nationality of the worker; different levels of subsidies for CEE and western farmers but also differing standards of customer protection regarding food, they are the factors that fuel the feeling of being treated as not equal among citizens of the CEE countries.
In many CEE countries agriculture was discussed rather heatedly. Several citizens expressed their opinion that the EU membership caused a decline in the agricultural sector, and thus use the decline in agriculture as a justification for the EU criticism. 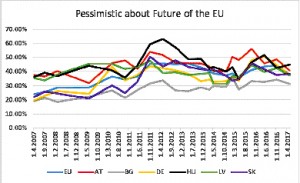 On the other hand, the feeling of injustice was shared also among participants from the old member states. They pointed at „some Eastern European (member) states“ as the ones for whom the same principles do not count. The problem was repeatedly mentioned as the disrespect for European rules and values on the part of these countries. As one participant in Austria put it: “These countries only want to have benefits without giving anything back.”

Four freedoms (free movement of people, goods, services and capital) of the EU were spontaneously mentioned in all debates across all participating countries as the main benefits of the European integration, although in rather abstract terms. Further discussion of the four freedoms, however revealed the differences between Western members on the one hand, and Central Eastern European countries on the other hand. In Germany and Austria the freedom of movement was positively valued not only from the perspective of personal benefits, but also as a general principle worth of upholding. On the other hand, participants from CEE countries viewed the four basic freedoms more through the optic of personal benefits related either to them directly, or friends and family members. Additionally, in CEE countries the freedom to move to other country was also viewed partly negatively as it contributes to brain drain and massive departure of young people from these countries.

The Erasmus Programme was frequently named as one of the flagship projects of the EU that offers the possibility to experience the European community first-hand and the chance to build a European identity among young people in the long run.
Comparing debates on benefits of the EU, the other striking difference between cases was predominance of material benefits valued by citizens from new member states. 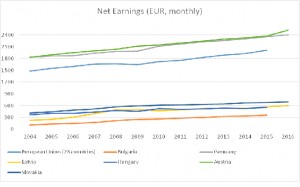 Due to massive support from the EU cohesion funds, people were more likely to name development of infrastructure (more than anything else) as a benefit of the EU membership. Benefits as security or empowerment of the states on international level (as a part of the EU) were rarely mentioned in these countries but they were part of the debate in Austria and Germany.
It is also noteworthy that historically well-defined benefits of the European integration (as the long-lasting peace on the continent) were rarely spontaneously mentioned as perceived gains. Only some older participants from Germany mentioned the importance of the EU as a guarantor for peace and security.

Lessons learned from the debates in the six states under the research point on two aspects of the EU project that should not be taken lightly in order to maintain the overall support for the integration.  Especially when having in mind the (unrealistic) expectations in both old and new members that fueled the euroscepticism were mainly created by politicians.

First, it is necessary to preserve the four freedoms as the single most valued achievement of the EU in the form as we know it today. Restrictions on Schengen regime or possible protection of domestic labor markets could harm the EU project irretrievably. Possibility of differentiated integration as a future avenue for the EU should be treated very cautiously.

Second, despite the fact, that the EU cohesion policy has improved the situation in CEE region significantly, new member states are still economically lacking behind. Debate on the new perspective of the EU cohesion policy should take it into account. The exit strategy (from the EU funds) should be adopted while transition period of reducing the EU support would be still in place (even after 2020).

The project was supported by the Europe for Citizens Programme of the European Union.

The European Commission support for the production of this publication does not constitute an endorsement of the contents which reflects the views only of the authors, and the Commission cannot be held responsi­ble for any use which may be made of the information contained therein.